Another task of StatsManagerComponent is calculating received damage.

There is also TakeDamage function in interface I_CanBeAttacked, but it is meant to check whether hit was parried / blocked etc.
then it calls TakeDamage from this component to subtract stamina or health.

Function TakeDamage takes in 2 parameters, and it uses other stats like Armor / Block to calculate final damage. 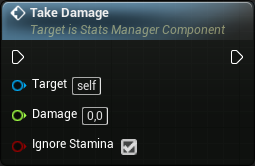 StatsManagerComponent also tracks number of received hits / damage, which are summarized and gets reset after 4 seconds if owner didn’t receive any damage.

Those variables are mostly used to implement AI behavior, but could also be used to display recently received damage.
Example of that could be that AI can’t get stunned if RecentlyReceivedSuccessfulDamage exceeds 50 (BP_BaseAI -> CanGetStunned).